Outline of the final two chapters 13 and 14 of our handbook!!!

Reminder: We are IY'H meeting this motzai Shabbos at ten.  Shira emailed the phone numbers out.  Thank you Shira!

Chapter 13: Leaving the “Egypt” Within and Experiencing the True Redemption
(Adapted from Sefer Bilvavi Mishkan Evneh on Pesach)

(As we said in the chapter above yesterday) The inner way to look at reality is to see everything as one.  Thus, the redemption is all about unity/ achdus- the ability to leave the selfish “I” so that there is no divide between the individual and Hashem- self absorption prevents the revelation of unity.

How do we acquire this higher da’as that is hidden from us, the kind of da’as which unifies the many different types of da’as that everyone has?

“The main part of the redemption is to be redeemed from one’s selfish ego…the purpose of the redemption is that everyone should recognize Hashem; it is about revealing Hashem, not revealing one’s “I”…This is the depth of ahavas Israel, which is the secret of the final redemption…you leave your ego for the sake of integrating with the rest of the Jewish people… to integrate in unison with Him, who is the only One Who exists.”

Chapter 14: How You CAN Leave the Exile:
(Adapted from the drasha "Bein HaMitzarim, 018 From Exile to Redemption)

Hashem is called makomo shel olam, "Place" of the world.  He is the true "place" that we need to connect to.  We have to leave our connection to the good and evil mixture in this world and connect to Hashem.  We can leave the exile right now and gain da'as by connecting to Hashem wherever we are.

Ain od Milvado: There is nothing besides Hashem:

To understand this we need to nullify our "I"- erase our ego completely: go from ani ("I") to ayin (nothing).

How do we nullify our senses, our sense of self/ "I"?

Through emunah: realizing that our senses are only part of a bigger picture and there are infinite things above our comprehension, then we leave our view from the space of our senses and instead attach to the Ein Sof of Hashem.

There is a special chamber in the Heavenly chambers for those longing to become integrated with Hashem- work on realizing more and more Ain od Milvado.

But you can't get there by thinking about it- only through deveikus= a soul experience.  This chamber is actually the inner chamber of Moshiach because at the core of the Torah is Ain od Milvado.

Outline of Chapter 12 of Inner Redemption Handbook by Rav Schwartz 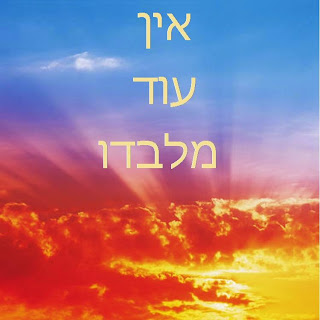 The humility of Moshe Rabbeinu: he negated his “I”, recognized it- but chose to lessen his ego rather than enlarge it.

The humility of Moshiach: he doesn’t even consider the “I”= absolute humility- knowing the only “I” is Hashem; Ain Od Milvado consciousness (Seforim Hakedoshim say this level will not be completely attained by anyone until the end of the year 10,000- but each person can access this somewhat, according to his level)

In summary: two types of avodah-

1. a reality of working within the “I” - lower one’s sense of self and think about lowliness of human being and strive to grow spiritually step by step

2.   a reality above the “I”- leaving the “I”- “redemption of the soul- when a person never thinks about himself and doesn’t live for himself- this is really the secret implication of the term ‘lishma’, (acting for Hashem’s sake only)…

The avodah of this 6,000 year period, (termed neshamos) is for us to connect to Hashem with our neshama.  It is to purify our souls- through divesting ourselves of the body, as well as purifying the soul itself as we draw our “I” closer and closer to Hashem-…avodah of the light of Moshiach (also known as Elokus) is to realize there is no “I”- completely integrating with Hashem”

The humility and mesirus nefesh of Moshe Rabbeinu has a different definition than that of Moshiach.  Moshe is personified by his da'as- great comprehension merited because of his humility- the humility of Moshiach will reveal new depth to humility and to the meaning of da’as /the da’as of hishtavus- no need to unify and separate- because everything is already unified.

“The humility of Moshiach will reveal that there is a Torah above one’s “I”, a Torah of complete Elokus.  The Torah of kabbalah, entirely Elokus, is thus the secret to the redemption….from the actual view of Elokus, the “I” is totally our of the picture.  This is actually the secret meaning of the redemption.”

Teshuva:
a. deeds- realm of asiah
b. midos- realm of yetzirah
c. thoughts- realm of beriah
d. return our “I” to its Source- realm of atzilus- to connect ourselves to the state of nothing but Hashem- this is the depth of teshuva.

Mesirus nefesh, humility, and teshuva are all synonyms for having no “I”.

In this higher avodah (Elokus), the Torah is all an expression of how to negate one’s “I”, to return to the “I”- Hashem.

Shabbos of the future: year 7,000 begins a period of “a day that is entirely Shabbos”- an eternal rest- the only movement will be our “I” =da’as- moving to its root- this is really a rest, but we perceive it as a movement because we are in the 6,000 year era of movement and all that we understand is movement.

Before the world: Hashem’s endless light filled all of existence.  Then, Hashem created a space, called chalal = an empty space, and then Hashem created Adam Kadmon.

Why did Hashem need to empty out a space to make the universe? to show us that each step represents an avodah:

1. Before creation= total integration with Hashem

2. chalal= we are able to access a state in which there are no creations, just empty space= no sense of “I”, a state of nothingness (Elokus)

3. Adam Kadmon- a person works with his “I” (neshamos)

Deepening our Emunah and Changing our Tefilos...
The Power of our Chaburah!- B'H!

Tapping into the power of Kislev as a group! 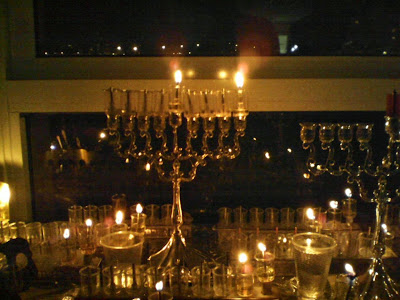 "Considering what has to be done to turn the situation around in favor of the Jewish people and redemption, it is more than overwhelming.

There are so few people involved with the task, and they have very limited resources.

Naturally-speaking it would be logical to shelve the idea and focus on smaller and more practical goals at this time.

Not necessary, as the GR”A revealed:

The accounting is such that the miraculous aspect constitutes a higher percentage of the outcome than the other aspects. When it comes to deeds concerning the footsteps of Moshiach, especially deeds performed by the community, the Gaon maintained that Heaven’s miraculous help is far greater than the measure-for-measure account.

The upshot of all of this? A few people can accomplish for redemption many more times than their natural ability should let them.

As the verse says:
The smallest shall become a thousand, and the least a mighty nation. I, God, will hasten it in its time. (Yeshayahu 60:22)

This says it all. A few people working on behalf of the Final Redemption will have the impact of a thousand people, if not more. More importantly, God
will turn their efforts into redemption, making sure that the Final Redemption not only comes, but that it comes on time."

Thank you for sending this Reitza Sarah!
Posted by aviva at 9:20 PM No comments:

Hashgacha Pratis...Reminder of what we are learning in the chaburah...

Another way of looking at "Become the change you wish to see in the world"... 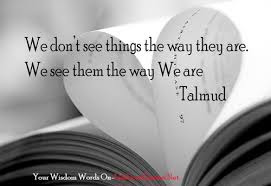