we aren't as numerous as the stars?

In Lech Lecha ( chapter15,5) Hashem says to Avraham  "look at the stars and count them if you are able to count them", then  Hashem says to Avraham, "so shall be your offspring".
( from the teachings of Rabbi Meir Shapira)
Why does the pasuk say vayomer Hashem - "Hashem said" two times in the same pasuk- we know Hashem was speaking to Avraham.  However, there was a pause- when Hashem told Avraham to count the stars, Avraham literally went out to count the stars- he tried to do the impossible.  Then Hashem said- so will your children be like this- attempt to do the impossible- to live l'maale min hateva- break the boundaries of nature.

We are his children, perhaps not as numerous as the stars yet, but certainly we have that trait of attempting to count the stars.  Isn't that what the geulah from within is all about? 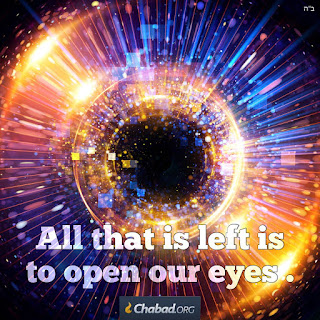 This goal, when will we reach it?

It was once far, but now it is near.

When will we hold it in our hands?

When we will open our eyes to see it is already here.

Rabbi Freeman—among the last teachings we heard from the Rebbe.
Posted by aviva at 10:27 AM No comments:

Our year has begun.
New beginnings - such a hopeful concept! 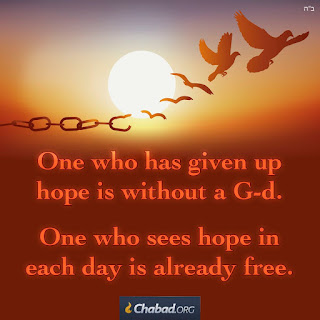 In fact, each moment is full of hope....hope for achieving in our avodas Hashem, hope for our loved one to have a relationship with Him as well, hope for unity and peace to pervade our homes and those of klal Yisrael, and really, truly, all of this is hope for the geulah- inside and out.